The Lean Startup by Eric Ries 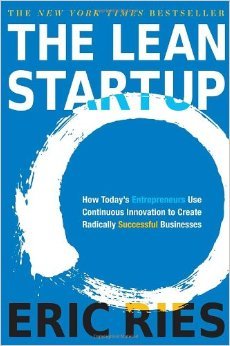 The Lean Startup by Eric Ries

Rapid iteration and feedback provide the best strategy for growth. Large organizations can easily be hindered by deferring launch of new products to a single release. This waterfall effect provides minimal customer feedback on the road to launch. If mistakes are made in the development of the product it is often too late. By launching early and often, feedback suggests an iterative approach will be best to get the right outcome. It is tough to compete against any company who moves quickly and changes equally as fast. During times of rapid change a companies agility and shortened feedback loops are paramount in the development of products people want. It can be quite costly to have a long feedback loop, where the development team does not talk to customers until extremely far along the process. One of the biggest mistakes companies can make is getting caught building something that nobody wants. This is a gross misuse of resources. Spending a great deal of time developing an aspect of a product that does not add value is simply a matter of not asking the right questions early enough in the process. When you are fast, mistakes can be caught early and corrected. When mistakes are caught early they are not nearly as expensive. Actionable accounting is one way Eric Ries suggests we measure the output and feedback from customers to ensure the development team is working on the most important batch at the right time. The can no longer wait to talk to our customers, we must talk to them now. Feedback is the core driver in the process of helping people get what they want. Without feedback you are building a product on an island with no customers. When your product finally leaves the island, you may realize that the people who are supposed to buy your product are from another island. These true customers are different and if you would have talked to them earlier they could’ve told you just how different they are from what you believed. Shorten the loop and you will get to a better product faster.

Startups exist to learn how to build a sustainable business. We are ignorant if we believe that we will get everything right the first time. I’m sure there are cases where everything goes perfectly. In reality the truth is far that success is far more iterative. An entrepreneur may have an idea which gets them going, they realize some key assumptions are flawed and change the idea, they do this again and again until they get to a sustainable business. When entrepreneurs start a company they are taking a risk, they are making calculated assumptions and moving forward. This is why so many investors look to work first and foremost with the best teams. They know that the best teams will be able to listen, learn and lead. They will be able to listen to their customers and adapt quickly. They will be able to learn from their ongoing experiments and make the necessary changes. They will listen to the data and go in the direction that’s best for the business and not just for the entrepreneurs core idea. A core idea can shift completely and this is we refer to as the pivot. A company gets to a place where they are so close, they’ve invested so much time and money and are still not quite there. One of their experiments tells them something that changes everything in an instant. A decision needs to be made that will set a new path, one based on new information. This can be one of the most profound decisions a startup team must make if they are going to get to their sustainable business. It can take time to get to where a business needs to be. Startups typically don’t have the time nor do their investors. Pressure from all directions make most startups overworked and extremely stressed. This stress is in the form of excitement and a relentless pursuit in getting to a sustainable business faster. The lean startup includes excellent examples of companies who have pivoted many times successfully. If pivoting is based on research, rapid experimentation, and customer feedback, it will help achieve a sustainable business faster.

The Lean Startup was an excellent read. As a trained industrial designer many of the ideas echoed some of the principles of a design methodology.  The books speaks directly to the technology entrepreneur but can apply to entrepreneurs in any industry. Eric Ries does a great job combining stories with supporting data and insightful observation. The Lean Startup is a critical read for any company looking to compete by building things people want and are willing to pay for. The book is a manifesto of sorts where you get to look inside the mind of a builder whose tools are speed, people and technology. I’d highly recommend that if you’re going to develop anything, you apply the ideas in this book to get feedback faster and sustainable growth more rapidly.