How to Coach – Coaching Yourself and Your Team to Success – By: Jo Owen – Book Summary 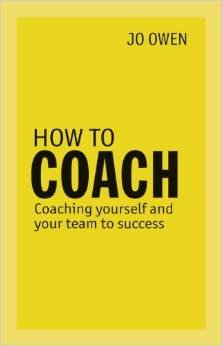 How to Coach – Coaching Yourself and Your Team to Success – By: Jo Owen

Coaching is something we must master. In business we now manage brains not hands. We can no longer tell people what to do. We must now work to get the best out of them. Books and training simply will not cut it. The reality is that the best learning comes from what works best. In the long term you and your team achieve more if each member knows how to solve problems more intelligently. Coaching is a long-term investment. The case for coaching is growing because things keep changing. In the 21st-century, you are never finished your work. The rules are always changing. When we are told something, we don’t believe it. We need to discover it to make it true. The biggest argument against coaching is that we don’t have time. Coaching is not a cost, it’s an investment. Coaching is a journey through discovery that follows process and develops substance. Coaching conversations are structured like an interview. It is easy to complicate, hard to make simple.

According to Jo Owen, the secret to coaching boils down to the five O’s. The five O’s are as follows; objectives, overview, options, obstacles and outcomes. The first thing you need to do is understand what you need to achieve. Your job is to help your team member discover the truth. When we take responsibility we take control. Open questions lead to deep answers. Some common mindset traps to avoid are groupthink, extremism, helplessness, conformity, perfectionism, copernican, defensiveness and emotion. If any one of these mindsets exists, defeat is inevitable. The coach and the team member must agree on the real issue. The goal is always to drive action and responsibility.

Jo Owen shares seven successful routines and principles for coaching. They are responsibility, respect, listening, partnership, questioning, positive outlook, and learning to reflect. As adults, everyone is responsible. The victim mindset takes no responsibility for any setbacks. The easiest way to respect a person is to listen. The strongest sign of respect is trust. The better the coach the better the listener. Partnerships mean treating adults as adults. The best questions will challenge and encourage new views. It’s important to maintain a positive outlook because people will always remember your behaviour. The coach needs to be learning from everything, everyone, and especially themselves.

Coaching ourselves is essential if we want to be successful. Coaching ourselves can be simple and practical if we follow a process. Coaching yourself boils down to active observation, reflection and practice. Coaching yourself is a process of continuing to improve. When coaching yourself it’s important to step back and observe. If you get caught up in the moment you will likely not see things clearly. A great question to ask yourself to gain perspective is “What would I advise a friend to do in this situation?” You’re not looking for the perfect solution, you’re looking for a good solution. When reflecting, the most important question to ask is “What went well?” When you see someone doing something well, ask yourself how they did it. If you enjoy what you do, ask yourself why you enjoy it. Make sure you play to your strengths.

Coaching yourself is the fastest way to self-improvement. If you want to get promoted, you need to be seen to have been doing the right things. If you want to join a senior club, you have to show that you belong. If you’ve ever considered that you have what it takes, don’t wait until you’re promoted to start learning people and political skills. A few keys to remember are; work hard, be reliable, be loyal, be positive and be proactive. Moving to the top is not automatic, you have to really want it. It is important to have clear objectives and tools. You can save yourself a lot of time if you do this right the first time. The difference between pressure and stress is control. Make sure there are times that you are completely removed from work. Hope is not a method and luck is not a strategy, control your destiny or someone else will.

This book is full of great coaching wisdom. I liked this book so much that after reading it I brought it with me as I traveled across Thailand. I only glanced at it a few times on the trip but I have fond memories unpacking it in various hotel rooms along the way. “How to Coach” is an important book that can help managers, team leaders and employees make the most of their careers. One part of the book that I particularly loved is the idea of how to take control. Taking control requires three things, an idea, people, and money. Once you have these three things you are in control. Align them in such a way that adds value, involves passion and creates opportunity. A great coach will make you more successful, becoming a great selfcoach will also help. My favourite quote from the book was…

“Coaches are like buses, they aren’t always there when you need them.” – Jo Owen