How I Raised Myself from Failure to Success – Frank Bettger 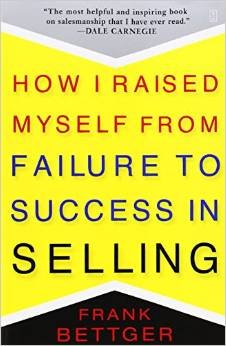 How I Raised Myself from Failure to Success – By: Frank Bettger

I believe truer words have never been spoken. If you think in terms of the other persons interests you will naturally approach them with the utmost care as to do otherwise could be fatal in your business relationship.

“A salesman cannot know much but he can talk too much.” said Bettger in 1949.

The biggest reason why a sales rep loses a sale is that they talk too much. Frank Bettger admired Abraham Lincoln because he was the master of brevity. We tend to admire people who are brief and to the point. This isn’t to say that we need to be abrupt. It is more an intention of being deliberate and thoughtful and sharing only what is truly important. Frank shares that during his career he developed the habit of talking less and less. This deliberate choice made him a better salesman. Although he did admit to struggling with the new habit, he found that by talking less it leaves plenty of room for listening. Listening is probably the greatest skill that any salesmen can possess. The only way to listen is to have someone else doing the talking. Most sales people are so intent on what they have to say that they are not really listening. They are waiting for their turn to tell the prospect about their products and services. Without listening we can’t truly understand the needs of our prospective customers. Without asking questions we don’t get the opportunity to listen intently. Use the power of talking less in combination with asking great questions to help you build trust and increased sales.

“The importance of being a good listener, showing the other person you are sincerely interested in what he is saying, and giving him all the eager attention and appreciation that he craves and is so hungry for, but seldom gets!” says Bettger.

This is definitely one of the best sales books I’ve ever read. It was written so many years ago but the ideas in it will help anyone in sales put their best foot forward. Frank worked closely with Dale Carnegie and I look at this book the necessary companion piece to “How to Win Friends and Influence People”. The book is well written and full of stories that illustrate why Frank was able to succeed at such a high level. From simple ideas like smiling and dressing your best to more uncommon ways to get meetings with busy people. Frank does not hold back from providing tremendous value that will resonate with anyone looking to grow personally and professionally in their sales career. This book should be required reading for anyone in sales.

To get the book: How I Raised Myself from Failure to Success – By Frank Bettger