Good to Great – By: Jim Collins 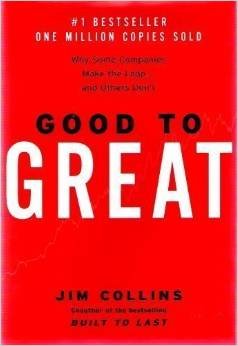 For a company to be great the need to be passionate about what they do, have the ability to become best in the world, and have an economic growth drive. This is called the Hedgehog concept. “If you cannot be the best in the world at your core business, then your core business absolutely cannot form the basis of a great company.” says Collins. It is not enough to just be passionate. Many companies are passionate about what they do and will never be great. The idea to be the best in the world is excellent. If you can’t be the best in the world and you want to build a great company, get out of what you are doing right now. When thinking about being the best in the world it automatically removes many options from the list of possibilities. This is a very good thing as it puts the focus where it should be, on your core strengths. An economic growth driver is essential to ensure that a great company consistently has growing revenue. As described in the book, passion, the ability to be the best in the world and a key economic growth driver are the three circles you must have to build a great company. When a company can put into place these three circles, there is nothing that can stop it. The company leverages only two circles can only be good not great. Like a three-legged stool, when you remove one it will fall over. Not every company needs to be great but if you are building one, this idea can make a big difference in the direction, profitability and impact your business has on the world. The incredible amount of research put into this work drastically separates it from any other business book on the market. The idea of the hedgehog concept, should be at the foundation of every great company.

Great companies require a culture of discipline. “When you combine a culture of discipline with an ethic of entrepreneurship, you get the magical alchemy of great performance.” says Collins. It may seem obvious but it’s not always apparent. Great companies are relentless when it comes to discipline. One area where it shows is in their people. Great companies hire the best people. If they aren’t sure that the person they’re thinking about hiring is the absolute best, then they will wait and hold off for a more suitable candidate shows up. This disciplined approach to hiring the right people ensures that the company can grow to be great. “People are not your most important asset. The right people are.” says Collins. Collins explains how the approach great companies take is first who, then what. The most important thing is selecting the right people to build the team necessary to achieve greatness. Once the team is in place, then what needs to be done can be focused on. Great companies disciplined in their approach to finding the right people end up spending less time worrying. The time taken upfront ensures that they team they have on board are the people that they’re confident will do what’s best for the company.

The difference between this book and most other business books I’ve read is this “It is important to understand that we developed all of the concepts in this book by making empirical deductions directly from the data. We did not begin this project with a theory to test or prove. We sought to build a theory from the ground up, derived directly from the evidence.” says Collins. A team of 10 researchers spent 5 years going through a ton of data to make these conclusions. If you haven’t read good to great I highly encourage you to pick up a copy and read it right away. This book came out years ago and I wish I would’ve picked up when it first came out as the lessons in the book are extremely important for anyone looking to build a great company.