Essentialism – The Disciplined Pursuit of Less – By: Greg McKeown

Mark Latimer
Book Summaries
Comments Off on Essentialism – The Disciplined Pursuit of Less – By: Greg McKeown 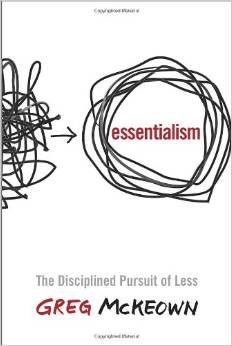 Essentialism – The Disciplined Pursuit of Less – By: Greg McKeown

Three words, “less but better”. It is not about getting more things done, it is about getting the right things done. It is a simple idea but difficult to practice. In order to focus on what is important, it means saying no to what is not important. This deliberate choice separates those who let others control their schedules with those who focus only on what is essential.

“It is about making the wisest possible investment of your time and energy in order to operate at our highest point of contribution by doing only what is essential.” says McKeown.

The underlying message is that everything is a choice. When we commit our time, we make the choice to say no to everything else that could have been possible for us at that time. In the book, McKeown shares an animal conditioning study. Using shock treatment, dogs were put into a state of learned helplessness. We are not immune to the effects of conditioning on our thoughts. Stifled for long enough, we forget that each of us has the power to choose. Choosing to do “less but better” is only available to those who consciously understand that everything is a trade-off. Time is fixed and needs to be treated like gold.

McKeown makes the point by illustrating that certain activities can be exponentially more rewarding than others. From his first job as a paperboy, he quickly realized that if he was going to save for the things that he wanted, he would need to find a way to produce more with less. He realized that he could start by washing his neighbours cars and immediately double what he was making delivering papers. As McKeown says,

“the essentialist discerns more so he can do less”.

Subtraction is useful. McKeown suggests that it is vital to subtract. Remove obstacles that get in the way of doing what is important. McKeown shares a story about a factory worker who manages operators of large industrial equipment. The manager is tasked with increasing efficiency. During a scouts leadership expedition with his son, he makes a sudden realization that solves his problem.

The scouts had to be at their destination before nightfall. When walking down the trail, the faster children would be so far ahead of the others that frequently they had to wait for everyone to catch up. This held them back. It became clear that the slowest hiker had to speed-up. By helping the slowest member of the group, it increased the speed of the entire group. By removing items from the child’s backpack and sharing the items with the group, the entire group move faster.

This plant manager had removed the weakest link. By focusing on the least efficient part of the process, he found a way to increase overall productivity. By subtracting what’s nonessential, it creates the possibility for dramatic improvements. The key is to identify what is nonessential. Now is the time to remove the obstacles that are preventing you from getting to where you want to be.

“Removing obstacles does not have to be hard or take a superhuman effort. Instead, we can start small. It’s kind of like dislodging a boulder at the top of a hill. All it takes is a small shove, then momentum will naturally build.” says McKeown.

Remember one thing, “less but better”. Getting clear on what you want is at the root of it. If you don’t know what you want, everything will be important. If you can get clear, you begin to see what’s possible. It is worth the time to gain clarity. The courage to say no is an essential idea that underscores our ability to do the right thing. We need to be able to say no to things in order to say yes to what’s important. Most things are not important. Give special attention to your choices. What is essential to you?